In Sirsangi, was the place where Swamiji intends to built a place for meditators called “Tapovan”. The entire area of unpolluted nature had beautiful vibrations and i knew somewhere that there could not be an ideal place like this! There was cactus, there was bilva patra trees and there were the real tulsi plants. The leaves when chewed relished a very pure and strong taste of the original tusli leaves. The sky was bright, yet the breeze was cool and everything looked green around and in the near distance could be seen the powerful temple of Kalikadevi. A divine place! 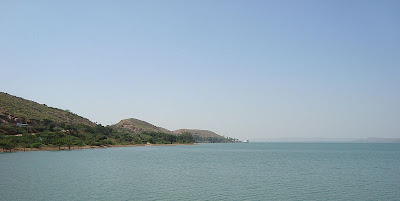 Sogal, is around, 40 kms from here. All these places are around the Malaprabha waters, also known as Renukasagar reservoir. All these areas that we traveled, the reservoir was visible, which showed that all these holy lands were situated on it’s banks.

Lord Dattatreya had walked these divine places of North Karnataka before he was last seen at Ganagapura, North Karnataka, which is only 275 kms from here. Ganagapura. Even Baba Nityanand is well taken as the incarnation of Lord Dattatreya and these areas so much signify the presence of all incarnations mentioned in the song “Jai Jai Aarti Nityananda….” It contains the lines: 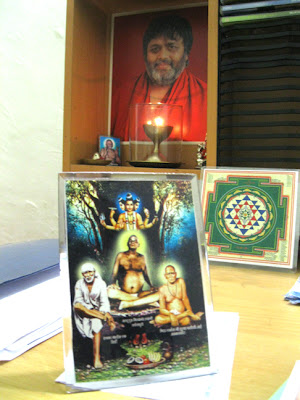 Even Swami Samarth was in Akkalkot, which is 75 km further up which is and Maanik Prabhu was 100 km further north in Bidar, North Karnataka. Further the aarti also narrates of:

The photograph above is my desktop photo which has My Master (in red robes) below which is the photograph of the lineage of Lord Dattatreya kept. 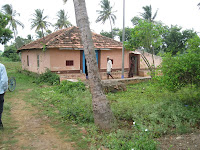 On the way to Sogal, one can find another ashram of Baba Nityanand of Ganeshpuri, known as Mullur Ashram and this was where Swami Vijayanand lived for more than two years doing his sadhana around here and in the rocky caves of Sogal. This house had just one room and looked like a normal house. A look at the large photo of Baba Nityananda only brought so much of peace and love; his presence was so strong all around in these areas and especially in this little hall. 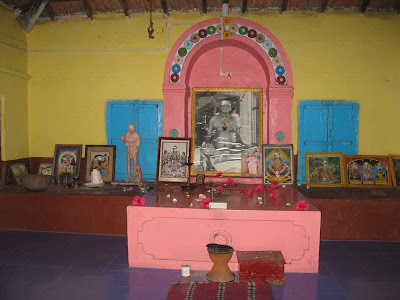 Along with padukas on the altar, there were pictures of many saints and siddhas who lived around. It also had a statue of Sogal ajja, who lived and did sadhana in caves in Sogal where he had taken samadhi. i called up Mohan Swamiji’s ashram to see if he was there and fortunately he was there. In half  hour one can reach the first part of the Sogal Hill, called “Chikka Someshwara”. There is a small natural cave here that has a Shivalinga inside the half open cave, on which natural water trickled on the Linga. This place is very isolated  and not much of common public come here. This has been a place of tapas of many yogis including those who come and do sadhana for siddhis and practices of the kind.

The other side of the hill is Sogal. The climb to the top of this hill over the wide stones steps lead to the temple of Sogal Somnath, which is known to be the meeting place of Shiva and Parvati. This is also a common place to see couples as they tie their nuptial knots here or singles come to ask for a life partner.
This place also has the ashram of Mohan Swami and 3 Siddha Jeeva Samadhis.

Sogal Ajja’s place and i was just awed to see this place. The cave entrance led us to a place which looked like and external part of the cave where photos of Ajja and other saints were there. Behind this cave another red-framed door led us to another internal cave. Besides this is the entrance with steps that go down into a long cave. There are no lights in here and one can go in with a torch. At first one walks, then bends and walks and then on knees to the point where around 4 people can comfortably sit at one time. This is the place Ajja used to sit and has a photo of Kalikadevi and a pair of padukas. It seems very obvious that this cave was dug out deep enough where one could not be disturbed. It is said that the Siddha here used to do tapas in here and lived with a cobra and a tiger in this cave. There are separate to enclosures near the seat of the Siddha, which are said to be the snake’s and tiger’s chambers.

Moving out from here, a little walk uphill is Swami Mohan’s hut. Besides the hut is the  Jeeva Samadhi of Siddha Maatanand Swami. Just opposite to the hut of Mohan Swami are two more Jeeva Samadhis of two disciples of Maatanand Swami. One of this samadhi is of a woman, who was also a Siddha and the disciple of Maatanand Swami. She took samadhi one midnight while the Guru was in his physical body itself, after seeking permission from Him. Once robbers approached Swami Maatananda in this place itself, to make Him reveal the secret of making gold. They insisted on gunpoint that he make gold for them and tell them the secrets or they would kill him. Swami Maatanand was in the state where he saw nothing separate from him and with everything around and thus with the same emotion of unconditional love he said, “Does that give you happiness? If killing me gives you happiness, then i am ready to die not once but thrice.” Saying so, he laughed in joy, compassion and love towards the dacoit, who threw his gun and fell at his feet.

Recently I had made a video on Oneness. FOLLOWING ONE PATH – WITHOUT BEING CRITICAL OR JUDGEMENTAL…. and then I wondered if doing such videos will ever help in any way. Who likes to listen to such? Who will want to dig into such deep but truthful insights? Is there...

Wrong Judgements… on the right track (My First Book)

It was not really about the confidence, but it was about the lack of interest to commercially sell what i write because i always wrote with the intension to help others and it worked well with my writings on the insights of life. So, after being blogging and writing my...

My home is home to staff from all faiths ~ R. Madavan

Here is another awakened conscious soul, who is an actor from South India – R. Madhavan. Soon after Actor Madhavan posted this photo wishing everyone peace and prosperity, few of his twitter followers did not like the cross that they spotted behind and one of them tweeted back to him:...

Experiences of the Divine and spontaneous healings

After few splendid days in Karad with the wonderful ShivYog Sewa team of Karad, Mumbai and Pune, and after a drive from Karad to Pune and halting the night at Pune, returned back to few moments of reading and aloofness in my train compartment. Along with my ShivYog colleagues, Parmesh...

Earth is evolving! I witnessed it!

In one of my recent journey I sat on my side upper berth on the train, watching a group of Muslim brothers, observing their extreme courtesy towards each other and fellow passengers. The Maulana soon took out his beads and began murmuring his chant, which diverted the attention of...

Read More
Conscious Videos For Travellers on the Path that will help enhance and boost your Journey to Light. Scroll on the right arrow for more

From The Heart; Not The Mind

How to be Divinely Guided – Creating Synchronicities – Following Your Heart

Why the process can be distressing? How to support the spiritual transition?

Spirit of Oneness ~ Following One Path without being Critical & Judgemental (HINDI)

Why life can seem chaotic and scary after a spiritual awakening